People who read my books might get the impression that I don’t like Manchester much, as I always write about the shady side of life. I tend to focus on that aspect of Manchester because I write Manchester based crime thrillers. Really, though, it’s no reflection on how I feel about Manchester. Sadly, every city has its share of crime. However, Manchester also has a heck of a lot going for it and I’m extremely proud to be Mancunian. So, I thought I would dedicate this blog post to things about the city that are worth celebrating.

As well as having two famous football teams, Manchester City and Manchester United, Manchester also has many other sporting facilities. These were vastly improved following the hosting of the

Commonwealth Games in 2002 and include:

Manchester Aquatics Centre – one of the biggest swimming centres in the UK and the only one with two indoor 50 metre pools.

The City of Manchester Institute of Gymnastics – run by qualified gymnastics coaches who train gymnasts up to Olympic standard.

A J Bell Stadium – Home to the Sale Sharks, one of the UK’s top rugby union teams.

Chill Factore – an indoor ski centre with the longest indoor skiing and snowboarding slope in the UK.

There are many museums in Manchester, some of them housed in historic buildings, and several of them themed, such as the Greater Manchester Police Museum, the Gallery of Costume, and the Manchester Jewish Museum. One of my favourites is the Museum of Science and Industry, which is a great day out for children because of its interactive exhibitions.

Theatres are abundant and tickets are a fraction of the price you would pay in London. You can expect to pay around £30 – £50 for a city centre performance of a well-known play or musical. However, I enjoy visiting local theatres in towns outside the city centre where you can watch lesser known plays written by local writers with tickets costing as little as £8.

According to Wikipedia there are 236 Grade ll* listed buildings in Greater Manchester and 48 buildings are Grade l listed. Here are a couple of examples of the city’s architecture:

Manchester Cathedral is a grade I listed building, which has a rich history. It is built from locally sourced sandstone with floors made of limestone from the nearby Peak District. Although the cathedral has been redeveloped and added to over the years, there is evidence of an early Saxon church. The cathedral has a small carving of an angel with a scroll in one of its walls. It’s called the ‘Angel Stone’ and dates back to around 700 AD.

Following the Manchester bomb in 1996, and the regeneration of the city, these two old pubs were dismantled and rebuilt on a site 300 metres away. They now form part of an area known as Shambles Square which is located near to the cathedral.

The modern buildings which I have shown in this article are located near to some more historic buildings. Yet the city is designed in such a way that the various periods of architecture sit comfortably alongside each other.

Take That, James, Oasis, Simply Red, Stone Roses, The Smiths, The Happy Mondays, New Order, Inspiral Carpets and Joy Division are just some of the big name bands to have come from Manchester. Although the days of Madchester and the Hacienda are now over, Manchester still has a vibrant music scene. As well as big venues such as the Manchester Arena and The Apollo, which host international artists, Manchester also has many smaller venues where local, unsigned bands play.

In some ways it’s a pity that my partying days were in the 80s because Manchester is so much busier than it used to be, and there’s something for everyone. Whether you want pubs full of old world charm, trendy nightclubs, bars that cater to office workers wanting to unwind at the end of the day or bargain priced cocktails for students, Manchester has it all. You can go out in Manchester on any night of the week and it will always be busy, unlike the recession-hit early 80s when Fridays and Saturdays tended to be the only really busy nights of the week.

Then there’s the world famous Gay Village, a collection of gay bars and restaurants centred round the pedestrianised canal street. The Gay Village holds the annual Manchester Pride carnival as well as other annual events. 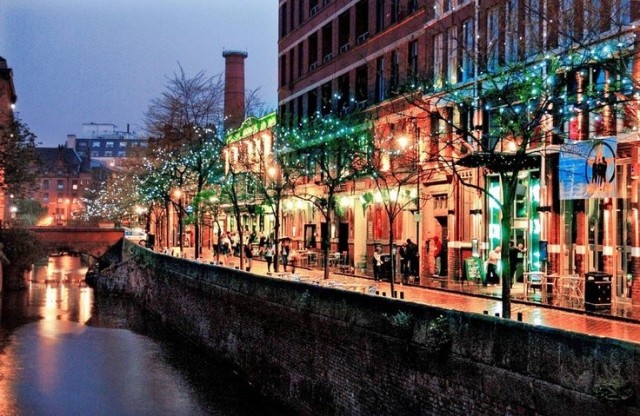 As with nightclubs, there’s a vast array of places to eat, and almost every type of cuisine you can think of. China town has been around for a long time as has ‘The Curry Mile’ but following the redevelopment of the city centre, there are more and more restaurants springing up all the time. There are also newer developments where several restaurants can be found concentrated into the one area such as The Printworks and Spinningfields.

Manchester is a great city for shopping. Apart from the Arndale Centre with over 200 indoor shops, there are several department stores: Harvey Nichols, Selfridges, Debenhams, House of Fraser and Marks and Spencer. There are also smaller shopping areas including The Royal Exchange, Barton Arcade, the trendy Affleck’s Palace, and The Triangle. The latter contains mainly upmarket shops. The Arndale Centre is Europe’s third largest city centre shopping centre, and is the eighth biggest UK shopping centre in terms of floor space. However, just a few miles out of the city centre, we also have the Trafford Centre, the UK’s second largest shopping centre.

For independent, boutique stores you could try the Northern Quarter, also known as the creative quarter. As well as individual shops, the Northern Quarter is the location for the Manchester Craft & Design Centre and the Centre for Chinese Contemporary Art.

Just outside the city centre is Media City, a relatively recent development aimed at the creative and digital sectors. It is home to BBC North and ITV, and has one of the biggest HD studio complexes in Europe. It’s a thriving and expanding area of the city which includes offices, retail space, apartments and restaurants.

If you’ve grown up in Manchester you probably won’t realise the advantage that the city has over many other parts of the country. It has an excellent road and rail network, regular bus routes to most parts of the city and an ever-expanding tram network. It does suffer from some problems caused by increased traffic flow, which the additional tram lines are designed to alleviate. Manchester also has an international airport with three terminals.

I’m sure there are many more things that I haven’t thought of and no doubt they’ll come to me after publication of this post. However, just to make sure I haven’t missed anyone’s favourites, here’s a fun article I found: 27 Excellent Things Manchester Gave the World.

In upcoming blog posts I’ll be looking at some of Manchester’s wonderful, historic libraries.